Howdy, Nice to Meet You. I Love Your Shirt. Really.

I know what you're asking yourself. What kind of name is Egg for....anything? It's a name not fit for man nor beast. Maybe. Maybe you're right. But for a book? Well, you'll have to read to find out.

What is Egg all about? It's a science fiction story set a few decades in our future. Biotechnology has given us the next industrial revolution--commonly referred to the Blue Revolution after BluLife, the corporation at its forefront. The daily treatment developed by BluLife has cured cancer, Alzheimer's, near-sightedness, and hair loss. Sounds pretty good, right? But one chance encounter and Walter Norris, a guy not prone to adventure or action, is dragged into a world of conspiracy, danger, and intrigue. What is the secret at the heart of the Blue Revolution? Who's trying to keep that secret under wraps? And what can Walter do to get out of this mess alive?

You'll be able to get Egg no. 1 for your very own by one of two ingenious methods:
I'll update again with more APE info later. In the meantime, check out a preview of the cover and first few pages: 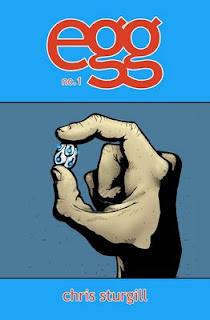 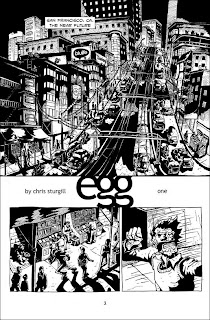 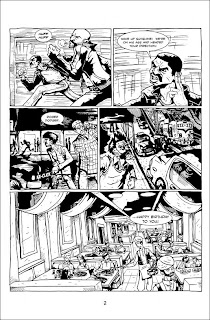 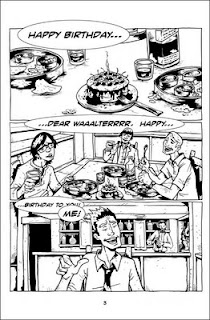 I have seen it already and it looks great. Congratulations!! Looks really professional and full of action. I'll definitely get one copy.
P.S.: Christopher didn't pay me to say this.