Attention Egg Fans: We Have Comics!

They're here. Finally. It's a little crazy to see a bunch, literally hundreds, of copies of this thing that was previously a pile of papers, pens, and empy coffee cups on the dining room table.

But before I get too metaphorical, let's switch to something fun that you can do at home. Take the Egg Personality Test!

It's easy: Take a look at this photo. 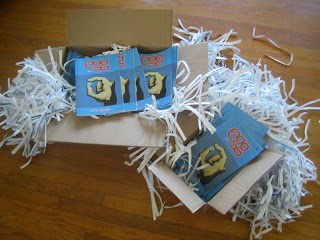 Now see which of the following statements best summarizes your feelings.


A) Wow, Chris, are you serious? That's all you ordered? Shouldn't you have ordered, like, eight times that many? Don't you think you'll sell out in the first two hours of APE?

B) Holy Mike, Chris, that is a lot of comics. Should you have ordered that many? I mean, do you really think you can sell even half of that at APE?

If you answered A, then you are either an optimist, my wife, or are one of my friends being nice to me.

If you answered B, then you might be a pessimist, a realist, or a real jerk.